How To Program Your Garage Door Opener

Learn how to program the new Overhead Door Odyssey® and Destiny® garage door openers to a CodeDodger® 1 Wireless Keypad.

Recommendation: Bring the wireless keypad next to the power head to save time and steps. This will cut down on frustrating time outs.  Have your previously programmed remote on hand as well.

Prior to programming, ensure that 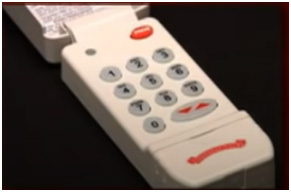 On your wireless keypad:

On the power head:

On your previously programmed CodeDodger 2 remote control (Odyssey or Destiny):

On your wireless keypad

The remote is now programmed.

The keypad must be mounted in sight of the door(s), at least 5 feet above the ground and clear of any moving door parts. Mounting screws are located inside the battery compartment.